Many five-year-olds are at that age of either having just starting school or starting soon. That is oftentimes a major transition for them, and though they are young they may be experiencing great stress. Thankfully, board games can offer them a quick break from the uncertainty of starting something new. Not to mention, they are just downright fun.

First up on the list comes, comes Hasbro’s Connect 4, it is a simple game to play, somewhat similar to Tic-Tac-Toe. Erected between two players is a rack, gridded out into empty circles. One player plays as red; the other plays as yellow. They take turns dropping circle tokens into the rack. The object is to complete a line (straight or diagonal) of four tokens while blocking their rival. Once a complete line is accomplished the tokens are dropped from the bottom of the rack. In most cases Connect 4 is a quick play, however, in some instances, the game does end in a tie, in which neither player is able to complete their line.

It is a simple game and usually fast-paced. It gives young children the opportunity to explore strategy elements as they learn how to block their opponents on multiple levels. It also gives them the opportunity to learn situational awareness as they track the moves of their fellow players. 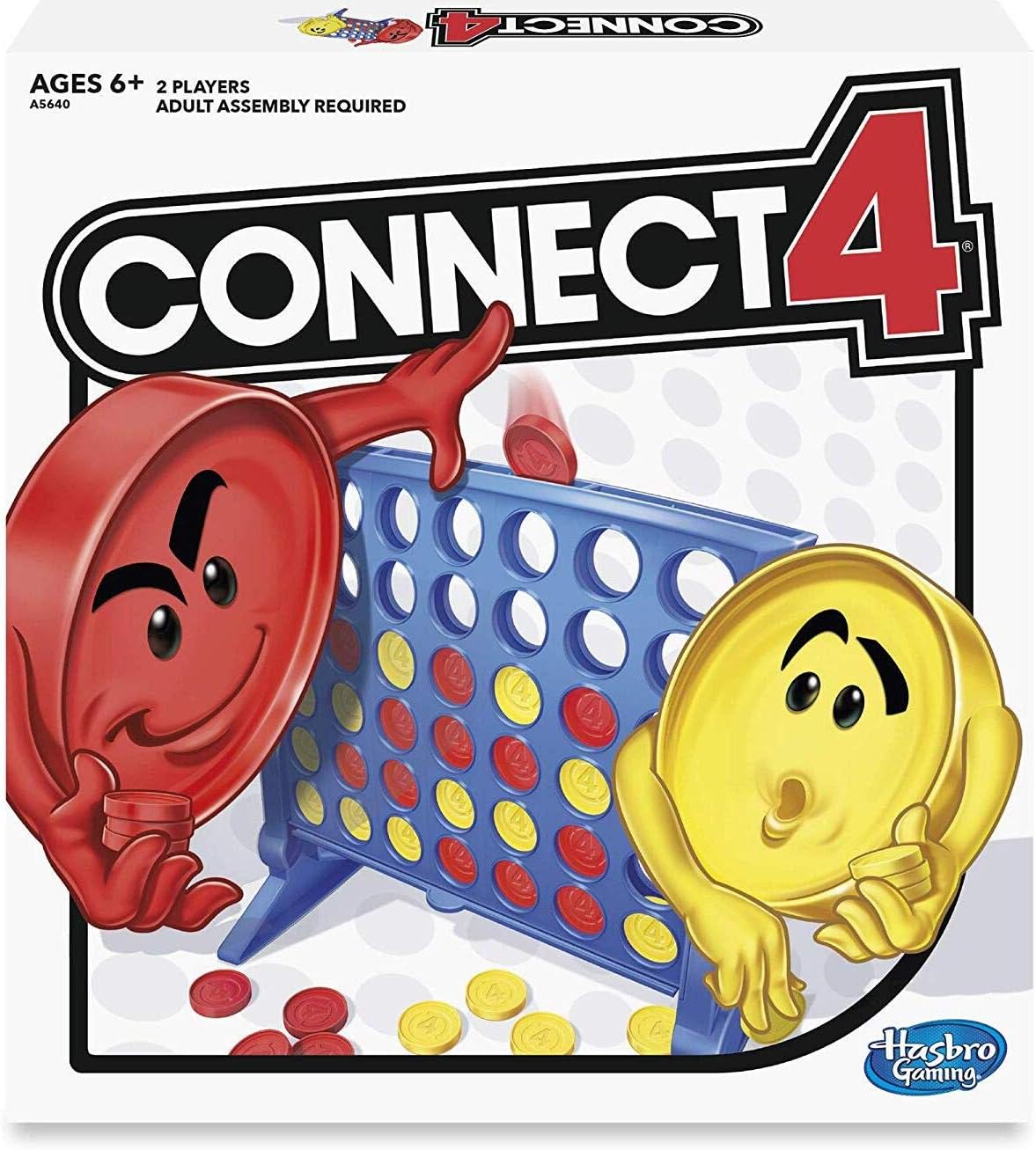 Next up on the list, Greedy Grandma, a game by Goliath Games. For those who have played Don’t Pop the Pig or Don’t Wake Daddy this game will seem slightly similar. However, instead of feeding the pig or sneaking through the house players are taking from Granny’s goodies. Granny has fallen asleep in the living room chair. On her lap sits a collection of snacks, her snacks. As granny sleeps players must try and steal treats for themselves. If Granny wakes up, they must return their acquired treats. The first person to have a treat of each type wins.

Throughout gameplay, players spin a spinner and are either rewarded or punished. They may lose their turn, may be forced to return a treat, may gain a treat, or may steal from competitors. When gaining or losing a treat, players will also be forced to press a button next to granny a designated number of times. If one of their pushes causes Granny to wake up, they must return all their treats. Don’t Wake Granny is steeped in suspense. Every push of the button runs the risk of waking Granny. When Granny wakes up, even those not pushing the button are likely to jump in surprise. It also offers to play an element of competitiveness with the possibility of stealing from other players. 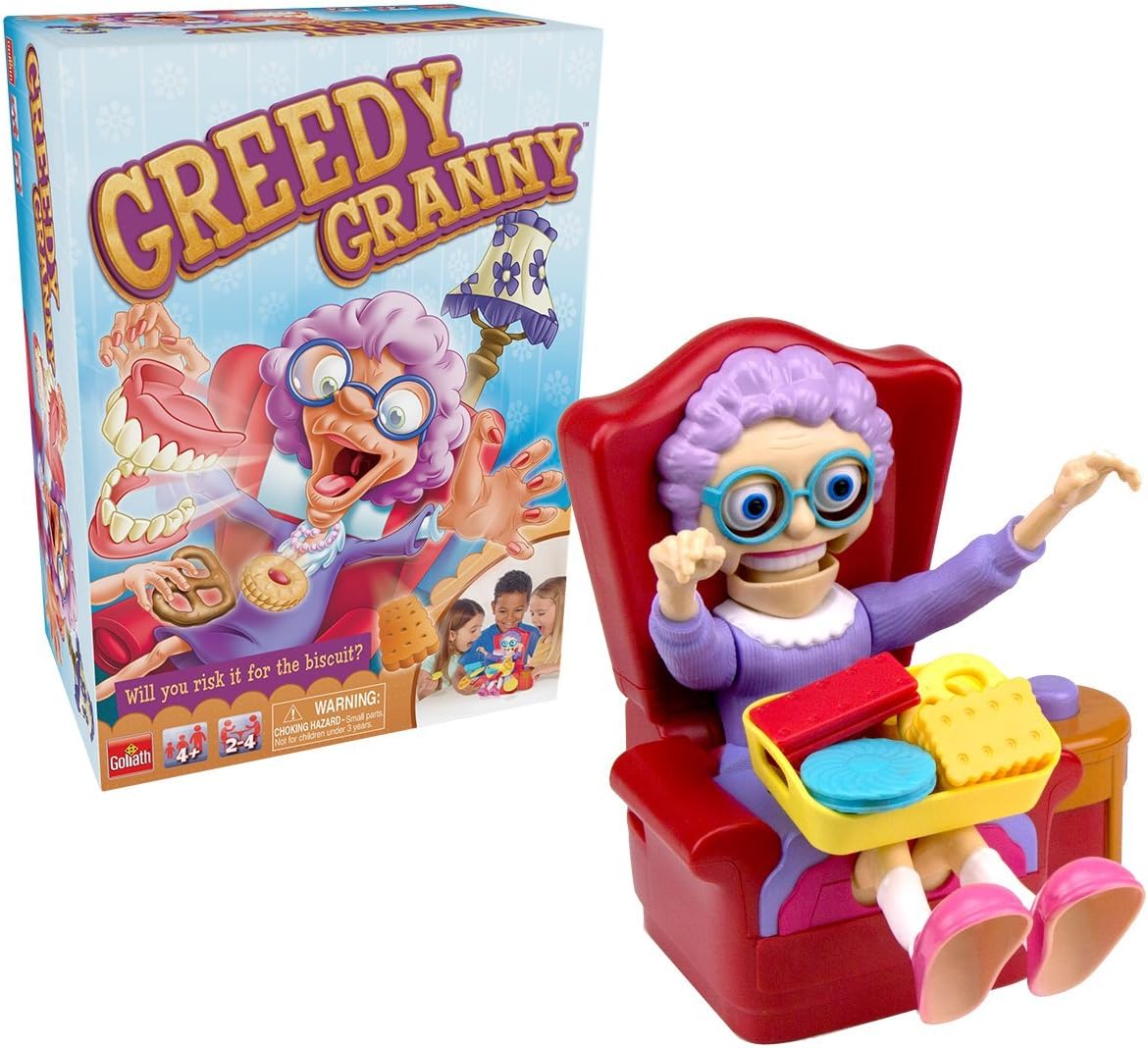 Another two-players game comes in the form of Guess Who? A game of deduction by the process of elimination. Each player draws a character card and assumes their identity. The first player examines a tray of character possibilities in front of them and then asks the other player a question in the hopes of narrowing down who their character is. Questions come in many forms such as: “Are you blonde?”, “Does your character have blue eyes?”, and “Do you wear glasses?”. The opposing player answers “yes” or “no”. Based on their answer the first player lays down the character possibilities accordingly. For example, if Player One asks “Do you have blonde hair?” and Player Two responds with yes, Player One then lays down all the characters who do not have blonde hair. Players go back and forth asking, answering, and playing down possibilities until it is narrowed down. When a player feels they can adequately identify who their opponent is, they may make a guess. If they are successful they win, if they guess incorrectly they fail.

Guess Who? puts children’s deductive skills to the test. Can they pinpoint who their opponent is before their identity is discovered? The game additionally encourages practicing children’s observation skills. It is also a quick game in which numerous rounds are commonly played. 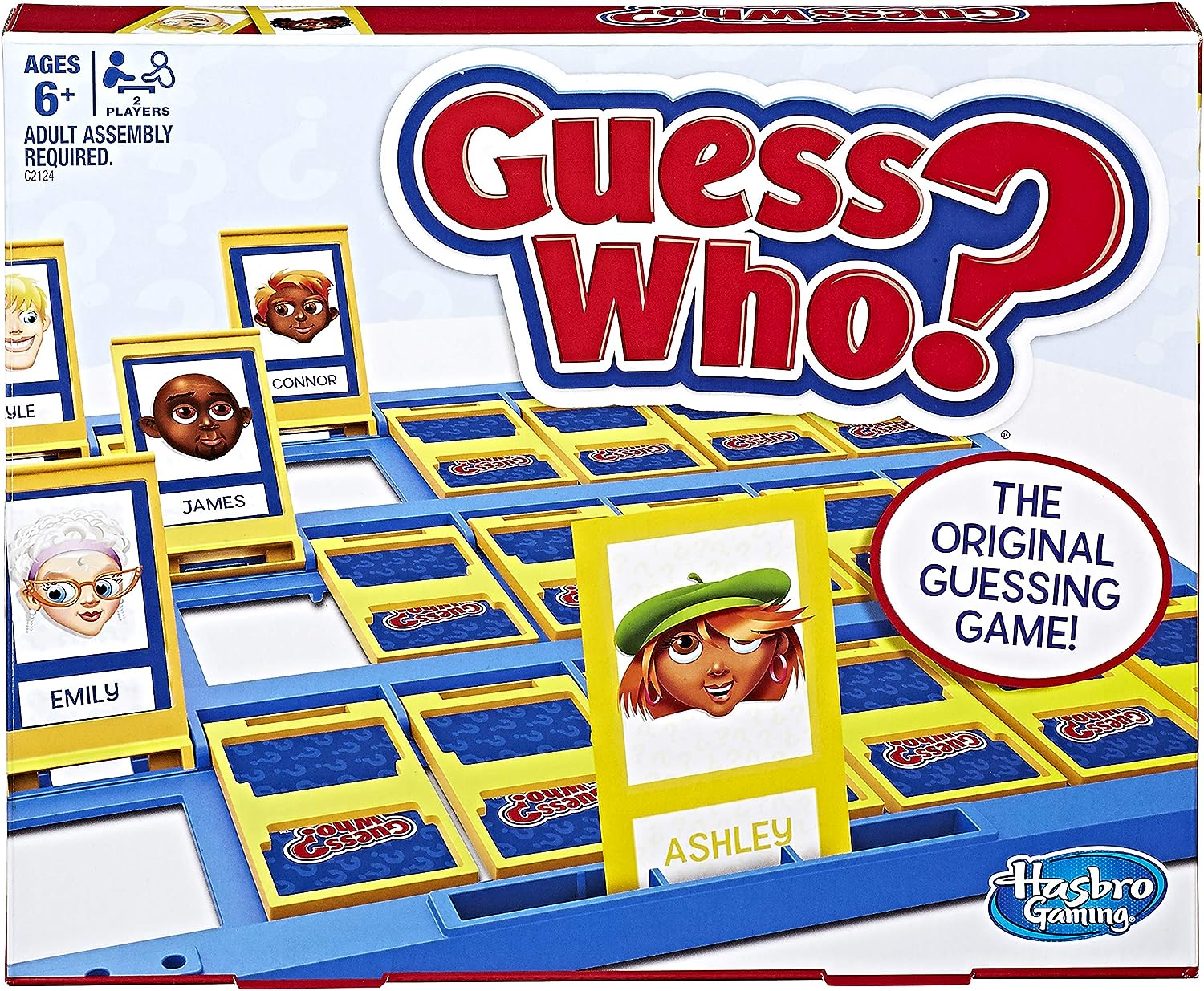 Players choose a colored pawn and place it on their designated starting place. Uniquely, whoever’s idea it was to play the game goes first. They roll a die and move the stated number of spaces. Each space on the board has an action that must be performed. A blank space indicates the drawing of a danger card. The card must be slid into the decoder and read aloud. In the upper corner is an image that matches one of the sides to the player’s rescue die. The player who just moved flips a time while the other players roll their rescue die until they reveal the indicated item or a wild side. If they succeed the card may be discarded and play moves to the next player. However, if they fail the card must be placed in the “Doom’s Day” chart. If the chart is filled before a player reaches the center no one wins and a new game must be started.

Throughout the game, players will encounter other obstacles as well. At times they might find themselves trapped in the jungle until someone, other than themselves, rolls a “5” or “8”. Furthermore, a Jungle space on the board will trigger a trap on all players in which they all must roll and match before they can be released. Lastly, a stampede of rhinos could block their path, pushing them backwards until they roll an even number.

Jumanji is a fast-paced game packed with action to keep young children intrigued. They have the opportunity to deter their opponents while being forced to rescue them as well. The main reason this game deserves a spot at the top of the list is the relatability for players. Because Jumanji has a movie connecting to it that players are likely aware of, children can utilize their imagination for even more visualizing as they play. Furthermore, the game contains several quotes found in the original Jumanji film giving them recognizable material, adding to the enjoyment. 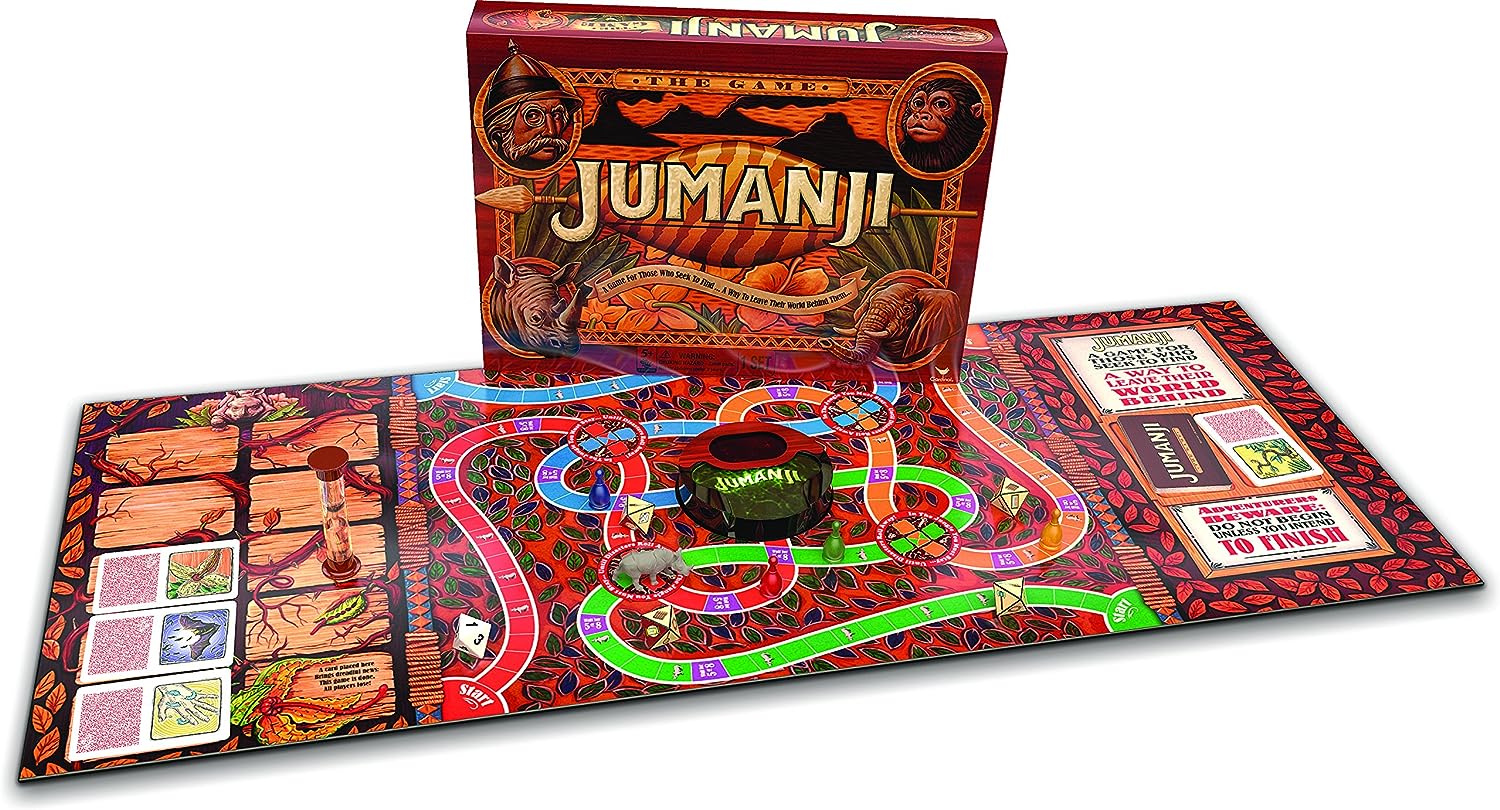 Lastly on the list comes one of the simplest games in existence, Rory’s Story Cubes. The game consists only of nine dice. Each side of the dice is etched with a different image ranging from question marks to a turtle. Players take turns rolling the dice. On their turn, the player must make a story out of the images displayed on the dice. Possibilities are endless in this game. The players decide who had the best story for that round and they are the winner.

Gamewright has released several variations to the standard dice set exploring several thematic options. Some of these options include themes such as voyages, fantasia, Scooby-Doo, and actions. They have also released smaller expansion packs, containing fewer dice, in themes such as prehistorian, enchantment, and clues. The creators of this game have truly created a game with endless opportunities that keep Rory’s Story Cubes from becoming monotonous. Because of its compact size and ease of play Rory’s Story Cubes makes a perfect game for five-year-olds in all settings. It would be perfect for playing will out and about waiting for dinner at a restaurant or waiting for doctor’s appointments. The playability of this game is truly endless. 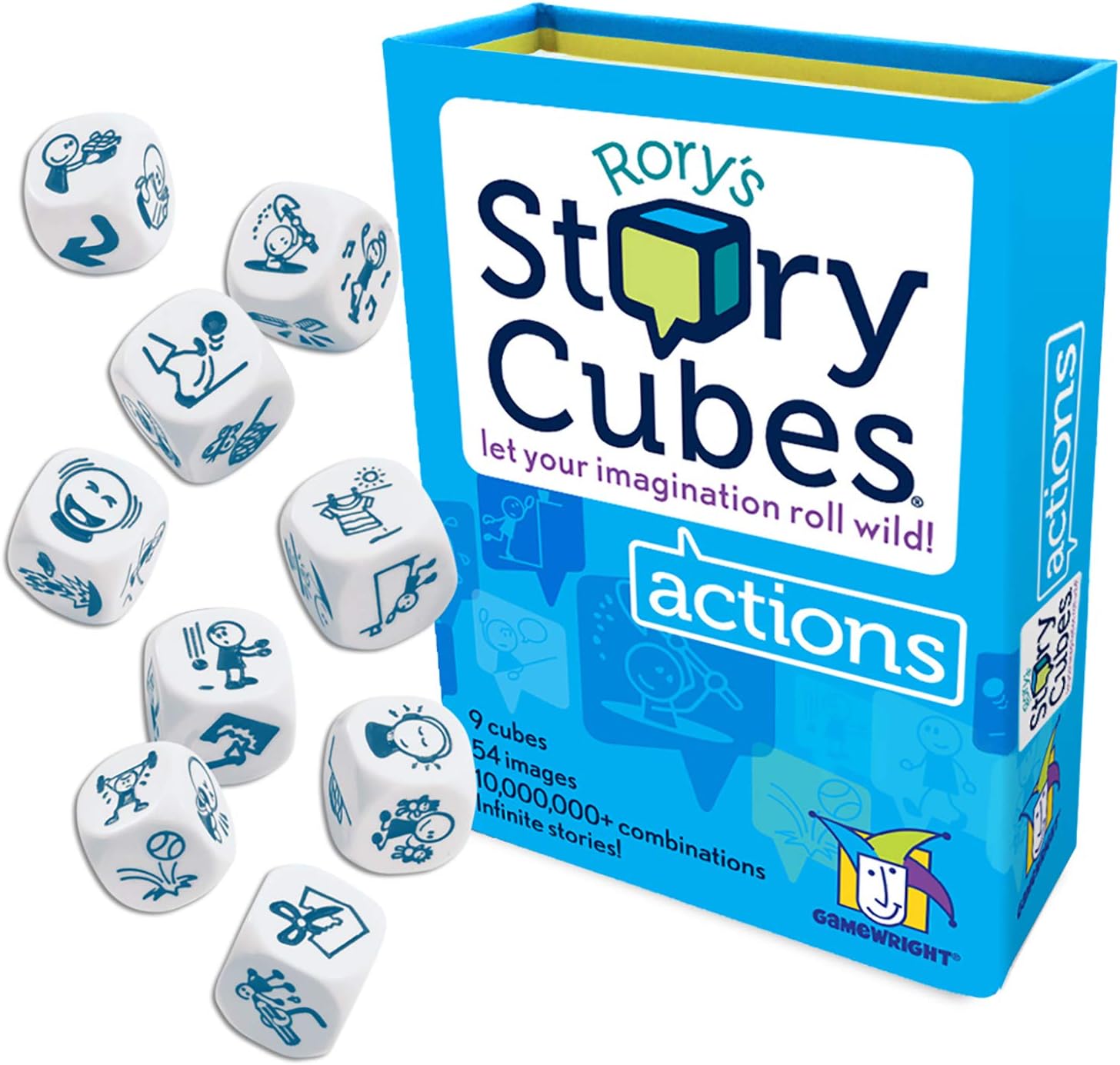