Are you a Fallout fan? Then maybe you have heard about the Fallout board game that Fantasy Flight came up within 2017. This is a franchise that has evolved and grown a lot in the past few years. Fans that have loved previous editions were not so hot on Fallout 76 and this game is clearly an early sign of that development. If you haven’t played it yet, then maybe you should consider reading this post first before jumping the gun on it.

If you have never heard about Fallout (What vault have you been living in?), it’s a franchise set in a post-apocalyptic world. A nuclear war left the country a wasteland, and people went underground, living in shelters to survive radiation. Quite a few years later, you are one of the first to leave your vault and venture out into the unknown. The setting has a vintage feel, as according to the game the transistor was never invented so technology evolved differently. Nuclear cars and futuristic looking weapons coexist with old radios, gramophones, fridges, monitors, all of them degraded and rusted. It is usually described as a “retrofuturistic atompunk” with a heavy 50’s feel. The game became popular very quickly, but it was not until Fallout 3 that it had massive appeal and there were engines that could support the open-world experience. 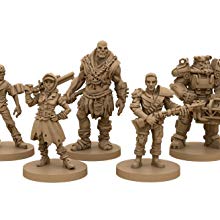 Apart from its looks, it is widely recognized as a funny and witty game. It is heavily story-driven: a world with no central government where different factions fight to dominate the wasteland could have very easily been a different kind of experience, but the writing manages to keep things light. The bleak surroundings, contrasted with the optimistic posters, illustrations and different characters that have unique or silly storylines -like the atom bomb worshippers in Fallout 3- give the franchise a dark sort of humor.

Physically, all the game’s elements have a quality feel to them -and there are a lot of them! For any fan of the franchise, the miniatures, your cardboard markers, perk cards (with the original Pip-boy drawings), all make you feel as though you are actually playing the video game. You can even encounter some characters from the original storylines.

Regarding the system, it is basically an RPG, just like video games too. You will be able to level up, choose between characters that have different perks, and advance the game through a branching quest system.

During your turn, you can choose two between a set of actions: explore, quest, move, fight, encounter, camp. Explore: The board is made up of tiles that are facing down during the game set up until a survivor explores them, which adds a bit of mystery. Quest: Topdeck a quest card. Move: Move to an adjacent tile. Fight: Initiate combat with a monster that is next to you. Camp: Rest up to gain a re-roll on the next turn and heal yourself from radiation and regular damage. 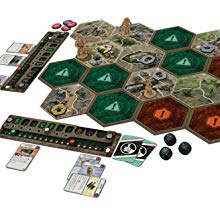 The dice combat is a little simplistic, though. Also, the bad guys are hard to beat from the beginning and there is no real sense of progress. Although in theory, you should get that from the upgrade system, the random element is too strong for such a long game.

This is a game about Influence Points, in the sense that you need a certain amount of them to be able to win, but in the process, your actions can end up also giving points to other parties – the factions. If the faction’s influence reaches a certain threshold, it is game over. If you have enough Influence, however, you can win together with the faction. There are different ways to actually get the points, but it is mainly top-decking cards from the quest pile. Sadly, it feels too random and completing quests does not give you a real sense of accomplishment, as you can work on something for a long time and only get one or two points when another player casually draws a card to gain four. The game’s flavor is skewed by this, as you can get some points from a quest that actually was not what you intended to do or who you wanted to support in the first place, but you meet the criteria and gain the points anyway.

In any case, the stories are well constructed and long enough that can actually garner some engagement. Each of them uses almost a third of the quest cards, but they would work better as different scenarios rather than missions in a single game that count for a point system. The first few could also turn out to be a little bit repetitive after a while, as you will be playing them over and over. On the flip side, they do have great progression and all of them are interesting to play, making watching other people play bearable, at the very least. 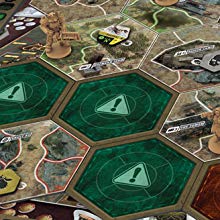 The downtime is minimal but the turns feel too short when playing with three other players. Other than hearing other people’s stories, there is no interaction between players. This is clearly because it is based on a single-player game. It actually does not matter how many people are playing except for the point system. We much preferred the solo gaming experience. It seems the designers had problems translating a solo-gaming experience to a multiplayer competitive board game, as it does not feel competitive or rewarding enough.

Final thoughts: It’s a really long game. In our experience, we were only able to finish one game out of a few. Scoring feels like a wild goose chase but the story is strong. I would not recommend it as a first-time board game experience because it is not a great example of the genre, but if you really like video games, maybe give it a try. The theming is great but lacks the humor the franchise is known for. There is no flavor text whatsoever, but the storylines are well constructed. The build quality is amazing, though. By no means is it perfect, or even great, but can build on your Fallout overall experience, just do not even think about it if you are very competitive, as it is more about the journey than the destination.