Gloomhaven is a fascinating puzzle sandwiched between surprisingly fun worldbuilding. It’s an intricate tactical simulation organized by a machine of well-designed interlocking components. It’s an exercise in squeezing every possible drop of content out of every component, clothed in stunning art. It’s a greatest hits of modern board game design that sometimes ends up feeling hollow and distant for reasons that are tough to put your finger on.

Gloomhaven falls under the umbrella of ‘legacy’ games, which is a good place to begin unpacking it. For those not in the know, ‘legacy’ defines a game that is permanently changed from session to session; cards are destroyed, stickers change values on existing components, and content is added in drips and drabs from tantalizing sealed packages. But here the first descriptive hurdle rears its head, because gamers who have played other members of this burgeoning family will make some very misleading assumptions when hearing the term applied here. “Legacy” tends to imply a game with powerful forward momentum, mechanics, and narrative that make players want to see what comes next and complete the campaign in the way that a good book creates a tense desire to see how it all ends.

Gloomhaven is much more episodic. Yes, the world is changed by the players’ decisions in some genuinely interesting ways. New characters enter the stage and the secrets of the game’s setting are gradually uncovered. But Gloomhaven primarily uses its systems of unlocking new content and eliminating old to ensure that players are always moving through fresh variations of its core systems. Rather than the unfolding narrative of Betrayal Legacy, or the sense of constant discovery in Seafall, playing through the campaign of Gloomhaven feels more like buying expansions for a table favorite – more ingredients added to the recipe to justify another serving of the same meal.

On the other hand, Gloomhaven makes a hell of a compelling dish. The beating heart of this game is the system of tactical combat through which players will engage most of 95 (95!) included scenarios. After completing a City and Road encounter, which are brief A-or-B story cards much in the style of Eldritch Horror, and a much lengthier setup phase, the player characters enter whichever three to five rooms full of angry new friends they find themselves in today. 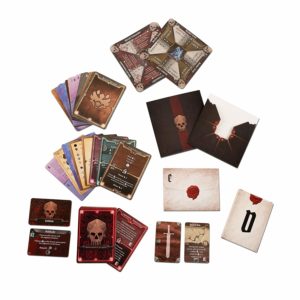 Each player character walks into the scenario with a deck of around ten cards. These cards each have an upper half and lower half with a different effect in each. On the players’ turn, they each choose a pair of cards to play – one will resolve the top half, and one the bottom half. This sharply limited pool of cards, and the choice between them, forms the resource-management core of players’ experience.

Normally, cards played are spent until the character rests. A short rest will refresh the character’s deck aside from one randomly chosen card which is lost for the rest of the scenario. Players can alternately spend their entire turn to take a long rest, meaning that they will get to select the card they lose and refresh any equipment they have spent. In addition, some powerful actions on certain cards cause the card to be lost when played, giving players once-per-adventure options to hoard until just the right moment.

All of this creates a deeply compelling puzzle of resource management and inter-player coordination, made more complex by the constellation of additional mechanics and components that surround it. Some actions will grant experience points that contribute toward character progression. Treasure found along the way or dropped by enemies must be collected during the scenario or lost forever. Some actions charge the area with an element, making other actions stronger or weaker or even unavailable. Each player has a customizable attack modifier deck in place of a more conventional dice system, adding somewhat-controllable variance to each offensive action.

Every tiny piece of Gloomhaven contributes a new tweak to this central concept of choosing a pair of cards each turn. Playing this move with that attack would do damage to these lava elementals, but will it get the most value out of charging the earth element? Is it better to grab the pair of loot tiles, knowing that they will evaporate after the scenario? Is the more reliable heavier attack a better option, even though it wouldn’t be available again until next session? Isaac Childres, the sudden celebrity behind this towering monolith of beautiful chipboard and plastic, has turned every element included in the box into a family of new variants on the game’s central puzzle. 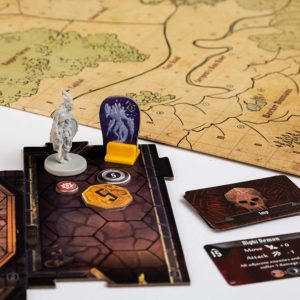 For this reason, Gloomhaven must be recommended to any fan of modern board game design. It draws ideas from Euros, deckbuilders, traditional RPG’s, and even abstract games to create a puzzle that’s genuinely hard to put down. Surprisingly for a product this large, everything works together beautifully to maximize the possibility in each element. Just when you think you’ve seen everything that can be interesting about picking the top and bottom half of two cards, you’ll be up against a corner facing a mob of skeletons who just got a lucky x2 and wondering whether it’s a better idea to become invisible or hope your teammate can do something useful with an elemental fire infusion.

However, every design decision that improves the mechanical challenge adds a tiny bit of abstraction. Why can’t you go back and pick up the gold after you clear out the warehouse? Well… because it makes the puzzle better. Why can’t you use your Impaling Spear again until you have a breather? Because it makes the puzzle better. Not only do these abstractions make it incrementally more difficult to connect the decisions you make with the fiction of a frantic life-or-death struggle with slavering monsters, they add to the time spent pondering your turn. 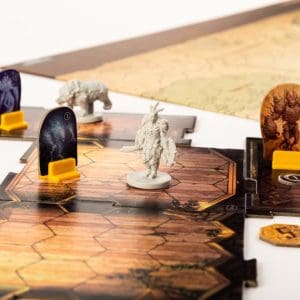 The riveting puzzle at the heart of Gloomhaven, the hours-long series of tricky decisions that epitomizes everything that is engaging about modern mechanical design, largely fails to communicate the idea that you are your chosen denizen of the surprisingly competent if unnamed fantasy world. The sheer gulf of time and thought between reading a situation framed in plastic heroes and cardboard monsters and choosing which pair of rigorously balanced actions to take makes it difficult to emotionally connect with what you are ostensibly doing.

While fans of modern mechanics will find Gloomhaven endlessly engaging, players who like sitting down to experience something outside their everyday lives will have a strange time. Most such gamers spend several hours playing something they cannot dispute is a ‘good game’, only to walk away having completely missed out on what they came for. If you love playing tabletop games to be someone else, or inhabit somewhere else, or do something you’ve never tried, Gloomhaven may not be what you’re looking for.