What actually qualifies as “the best” is a little ambiguous in most situations. When it comes to board games that rule still rings true. What one person finds pleasure in, another may not. Some games contain crude humor while others are a little more inclusive for all players. Some are thematically geared to certain interests. The following list attempts to portray a selection of games from both areas, exploring the best (and worst) qualities of games such as Trailer Park Wars, Cards Against Humanity, Sushi Go, Monopoly, and Ticket to Ride.

In this satirical game, from Gut Bustin’ Games, each player gets to live out dreams of owning and running their very own trailer park, complete with run down trailers and quirky tenants. Players randomly draw tiles to create their absurd park names. They are also given a collection of trailer cards representing each trailer in their park. Those trailers can be filled with tenants as the game moves around. Each player begins the round with seven cards in their hand from a selection of action, amenity, tenant, and natural disaster cards. Three cards may be played on their own trailer park or an opponent’s park each turn. At the start of their next turn players will add up the total of flamingos represented on their card and collect their flamingos. Play lasts until there are no more flamingos to pull from.

There is an option of purchasing more bags of flamingos to extend the play, as well as an expansion pack called, Trailer Park Wars! Terror in the Trailer Park. Because the game does take a stereotypical jab at trailer park tenants, some may find the content slightly offensive. However, assuming everyone is capable of having a laugh at themselves (and others) this game is a hilarious diversion from the daily grind for most adults. 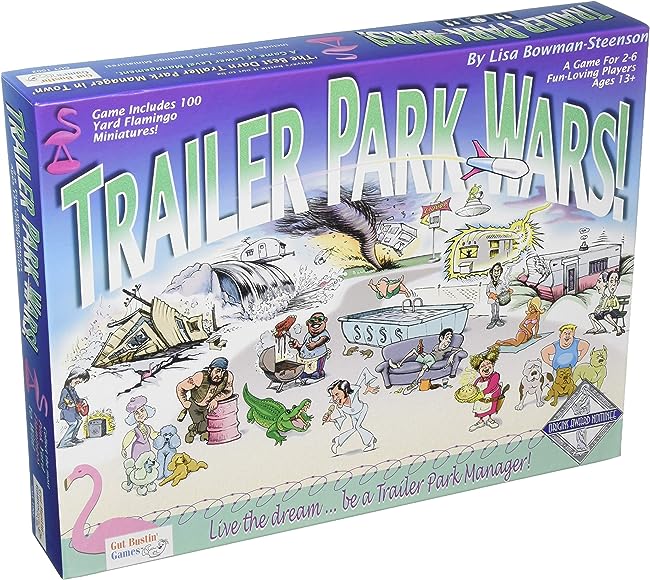 Even higher on the offensive scale comes Cards Against Humanity, one of the top adult party games out there today. White cards are dealt to each player. The remainder stays accessible to pull from after cards get played. The first player draws a black card, reads it allowed, and places is face up so that all plays may view it. The players that did not draw the black card selects a white card from their hand to best complete the black card. Once everyone has selected their cards and placed them on the table, drawing another to refill their hands, the drawing player reads the black card with each of the white cards. They will then pick which white card they liked best. In most cases, they choose whichever combination they find to be the funniest. The rules determine a certain number of black card acquisitions to be the goal. However, a lot of times players opt to run through the entire deck of cards for the sake of fun.

As play continues the combinations become more and more outlandish and offensive. This is not a game for the overly sensitive. If players cannot stomach crude material this one will not sit well at their core, and ultimately bring down the lightheartedness of play. There have also been several expansions released, including blank cards within each deck, to keep the possibility of combinations growing and prolong the playability. Just keep in mind this game is intended to be offensive, and may not be for everyone. 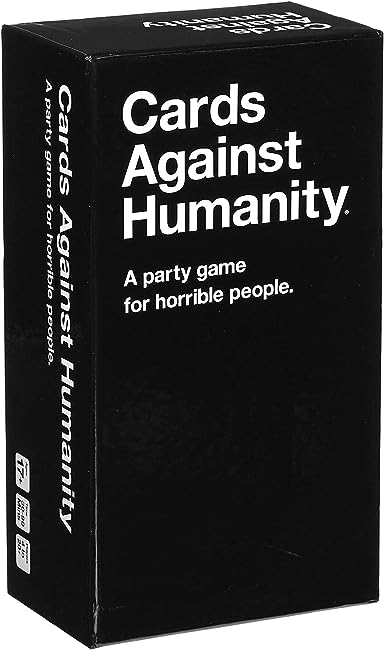 Another, and significantly less offensive, game played with cards comes to the table in the form of Sushi Go. This game is fast-paced and involves little setup. Players are dealt their hand. Once they have selected their option and placed it on the table they pass their hand to the next player in a conveyor belt fashion, similar to the sushi belts of Tokyo. The selected cards are then revealed. Play continues in this fashion until all cards have been played, thus ending the round. Each menu item (wasabi, tempura, nigiri, etc.) has its own set of rules for scoring. Puddings may be saved until the end of the entire game. Tempura only receives points if a player has a combo of them. Wasabi is a modifier for other menu items. Multiple rounds are played and at the end of each round points are added to the previous points.

Even though it is such a simple game its highly enjoyable for all ages. The whimsical sushi characters are adorable and attention-grabbing. A fast pace eliminates stale moments that can arise in more extensive games. The extent that the game follows its theme, sushi conveyor belts systems, is well done and adds a slight twist to the game increasing the enjoyment. 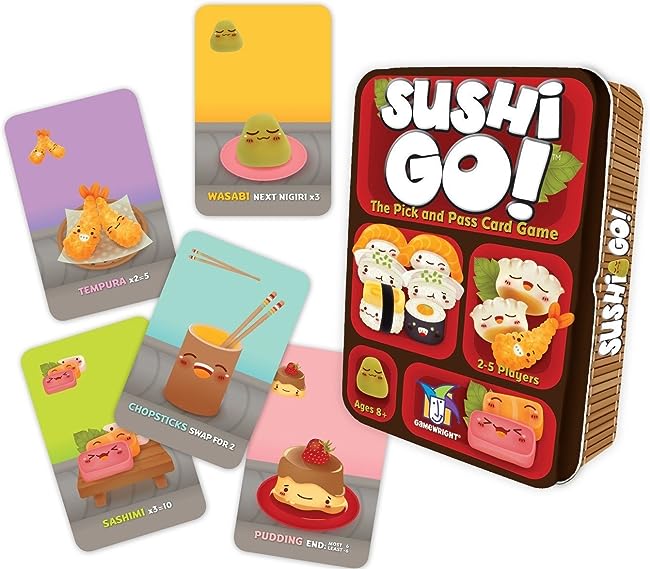 Hitting high on the list of “Best Board Games for Adults” is the all-time classic, Monopoly. This particular game has been around for decades, offering countless hours of entertainment. Players choose from a large selection of pieces, which the company has changed multiple times for various reasons, including allowing fans to democratically vote in a new piece. They then proceed to move around the board collecting properties. Once a set of colored properties is owned buildings may be constructed to increase the income potential. Players must borrow, trade, and spend to win the game.

Additionally, there have been several variants of the game released in order to keep players interested and keep this game at the top of the best game lists. The game makers have released thematic versions such as Game of Thrones and Pokemon. They have electronic banking versions and recently released a cheater’s edition. While the game is one of the best out there it is fairly time-consuming to play a full game in one sitting. 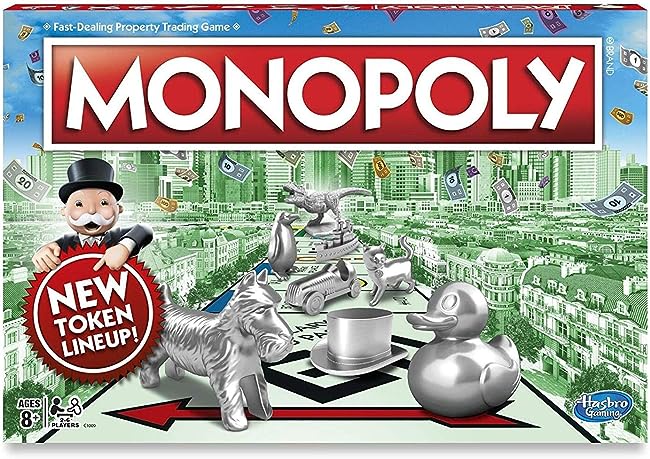 Strategy meets luck in Ticket to Ride. Laid out before the players is a map of the United States. Covering its surface are several train routes divided up into car lengths. Each player is assigned a color and given a pile of train cars matching the color. A matching scoring token is also distributed. Three destination cards are dealt to each player as well as five train cards. The destination cards represent different routes players must work to complete. Train cards display trains in various colors including a “wild” card. Five train cards are laid face up along the board’s edge as well. To lay down a train, players must have the designated number of appropriate train cards. For example, if Player One wants to lay a two-car sequence down between Kansas City and St. Louis they will need to have two blue, or wild, train cards. Points are earned based upon train length and the number of routes completed. Failure to complete a route results in losing points at the end of the game.

The gameplay is dictated not only by self-motivation in building one’s own train routes but also in sabotaging an opponents’ routes. The set-up is simple and the play moves quickly. Additionally, it is not one of the offensive adult games on the market and thus is usually enjoyed by all participants. 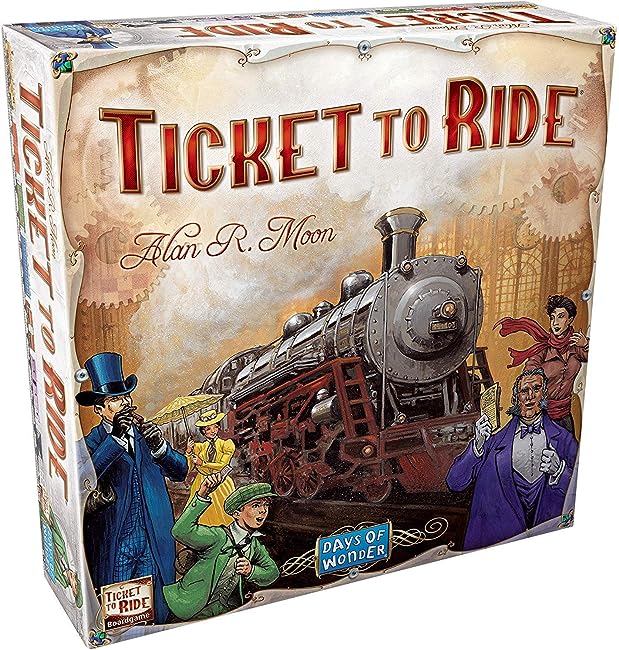